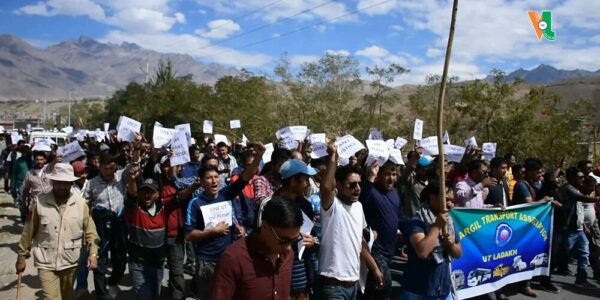 All the transport operators took a massive march from Petrol Pump to Council Secretariat in solidarity with the taxi operators who are demanding permit to freely ply in all over the Union Territory without any obstacle.

Since formation of the Union Territory the taxi operators permit have not been renewed and recently the Assistant regional transport Office, Kargil seized few taxis over not having vehicle permit, alleged the Taxi Union President Mohammad Ibrahim.

At Council Secretariat, Advocate Riyaz alleged that the LAHDC is not paying adequate attention to public issues instead of transferring Government employees, and distributing poultry and vegetables.

Meanwhile, Executive Councillor Mubarak Shah Nagvi addressed the protestors and assured to speak to the Union Territory Administration in a period of three days. If the UT Administration doesn’t pay adequate attention to the demands of the drivers, Mubarak Shah vowed to sit on protest with the taxi operators.

On asking about power of the LAHDC that Taxi operators alleged to have trimmed, Mubarak Shah Nagvi said that Taxi Union doesn’t need them to tell about their powers. The public already knows that how much power the LAHDC has and what they can do.

Rolling back the protest for three days, Advocate Riyaz said that the Taxi Operators have provided a chance for the LAHDC to resolve their issues; if no solution is reached in these three days, he said that new “course of action” will be rolled out after three days.